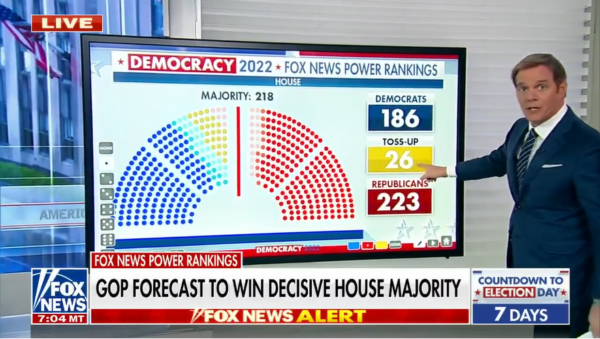 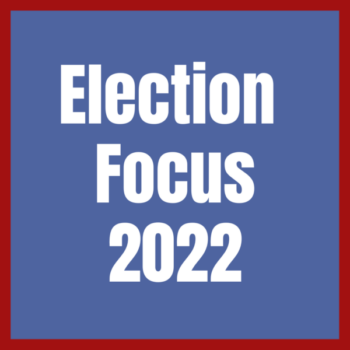 “The political press blew it.” So wrote Dana Milbank of the Washington Post (11/9/22), calling the fourth estate the “biggest loser of the midterm elections.” As he points out, most of the headlines leading into Election Day forecast a “Democratic wipeout.” And, it hardly bears mentioning, such a Democratic rout didn’t occur.

Looking at where the prognosticators went wrong, a common theme is an emphasis on the wrong campaign issues. A pre-election article in Politico (10/19/22), which purported to explain the “GOP’s midterm momentum,” encapsulated many pundits’ predictions about the House contest:

Twenty days out from Election Day, voters are overwhelmingly focused on the economy and inflation, Republicans are more trusted to handle those issues, and crime beats out abortion as a second-tier issue.

This view was also reflected in Fox’s final “Power Rankings” (11/1/22) that predicted “Republicans to take control of the House with a 19-seat majority, or 236 total seats.” Actually, if Republicans had won 236 seats, that would leave the Democrats with 199—giving the GOP a majority of 37 seats, not 19.  But why so bullish in the first place? “Republicans are winning on the economy and crime, and that translates into a decisive House majority.”

And Blake Hounshell argued in the New York Times (10/19/22) that the election was breaking in favor of Republicans for three reasons: the importance of inflation and crime, the relative unimportance of abortion, and the historical pattern of midterm elections that tend to be a referendum on the party of the president.

All these claims, of course, turned out to be wrong. 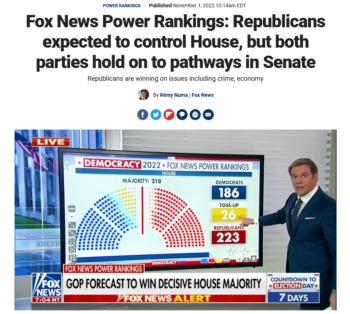 Measuring the importance of issues to voters is fraught with ambiguity. There is no single method for identifying such issues, and thus polls find different and often conflicting results.

That form of the question allows respondents to give their opinions on all the issues picked by the pollsters. Fox interpreted the results to mean that only the top two “concerning” issues—inflation (89%) and crime (79%)—would have any significant impact on the outcome. What to make of the fact that three other issues were “concerning” to more than seven in ten voters? That’s hardly a trivial number. Yet the other issues were completely dismissed.

Another way to ask the question is to require respondents to identify just one issue that is most important to them. But even then, different polls find different results.

A prime example can be found by comparing the two 2022 Election Day polls: the network exit poll and AP/Fox Votecast.

The former asked respondents to indicate which one issue was most important to their vote. 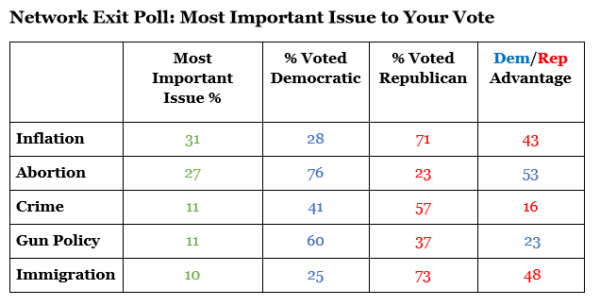 As the table shows, 31% of voters chose inflation, and among that group, 28% voted for a Democratic member of Congress, 71% for a Republican—for a net GOP advantage of 43 percentage points. Another 27% chose abortion, which favored Democrats by a 53-point margin.

The Votecast poll of 2022 voters also asked respondents to specify just one issue, though the question was phrased somewhat differently, asking for the most important issue facing the country. The question also included four additional items. 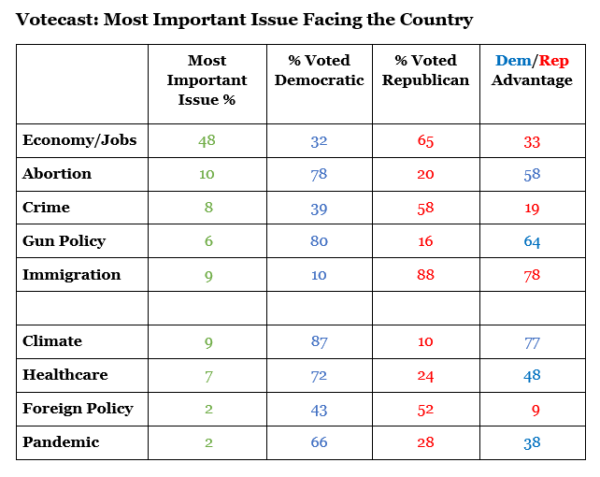 Note that the five issues listed by the network exit poll are virtually the same as the first five issues of Votecast. The only difference is how each characterized the economy—“inflation” and “economy and jobs” respectively.

Yet that difference in wording, as well as the number of issues, produced startlingly different results. Almost half (48%) of Votecast respondents chose “economy and job,” while only 31% of exit poll respondents chose inflation. Also, Votecast shows just 10% choosing abortion as the most important issue, while the network exit poll reported 27% listing abortion most important.

In short, according to Votecast, the economy and jobs issue overwhelmed abortion, while the exit poll suggested inflation was only marginally more important to voters than abortion.

Other significant differences can be found as well. Both polls show about 9% to 10% of voters listing immigration as most important. But Votecast says the issue favors Republicans by a 78-point margin, while the network exit poll says only a 48-point margin. Such differences among polls are typical.

Also, it’s worth noting that climate change tied for third place in Votecast, but was overlooked in the exit polls. This difference illustrates how subjective and arbitrary are the choices that pollsters make in determining which issues to examine.

In the previous analyses, little effort was made to differentiate the top issues of Democrats, Republicans and independents. But any attempt to understand the electorate requires such a differentiation. 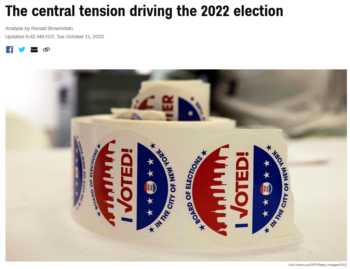 In his analysis of “the central tension driving the ’22 election,” Ronald Brownstein (CNN, 10/11/22) emphasized that Democrats and Republicans were focused on quite different issues. He cited Whit Ayres, a veteran GOP pollster: “The blue team cares about abortion and democracy, and the red team cares about crime and immigration and inflation.”

Brownstein went on to write:

The national NPR/PBS NewsHour/Marist Poll released last week offered the latest snapshot of this divergence. Asked what issue they considered most important in 2022, Republicans overwhelmingly chose inflation (52%) and immigration (18%).

Independents split exactly in half between the priorities of the two parties: inflation and immigration on the one side, and democracy, abortion and healthcare on the other.

The important and obvious, but often overlooked, point is that different voters are motivated by different issues. To note, for example, that abortion is a motivating issue for only 12% of the overall electorate overlooks the possibility that it may be a crucial motivating issue for Democrats (21% chose this issue) to turn out, and perhaps for independents to choose one party or the other.

Apart from the inconsistency in poll results, the notion that national polls can identify the issues that will determine which party will win control of the House is fundamentally flawed.

The assumption behind the previous analyses is that most voters choose candidates based on the issues. But that is backward for the vast majority of voters. People who identify with a party will overwhelmingly vote for that party, regardless of the issues.

Both Votecast and the network exit poll, for example, report that only 5% to 6% of party identifiers voted for a candidate not of their own party.

Pollsters may ask respondents to identify the important issues for them in this election, but the question is irrelevant for most Republicans and Democrats. They will choose among issues suggested by the poll interviewers. But the issues they choose will almost always be the issues that conform to what their party leaders are already stressing.

To put it graphically, for most voters PARTY —> ISSUES, not the reverse.

Of course, at some point in most voters’ lives, they will probably choose a party that best reflects their political values—or that their parents, or spouse, or other loved one prefers, or that appeals to them for some other miscellaneous reason.

But, in any given election, most voters have already decided which party they prefer, and will simply vote for their party.

That’s one reason why national polls on issues don’t explain why an election was won or lost. The identification of issues is irrelevant—except for a narrow slice of the electorate, which includes small percentages of swing voters, and of occasional voters who are indeed motivated by issues. And it’s this group that will provide the deciding votes.

These are the “persuadables”—voters who might be expected to vote for their own party and don’t; or independents who are persuaded to choose a Democrat or Republican this time, though they might change in the next election; or infrequent voters who decide to turn out in this election because of a particular issue or set of issues. 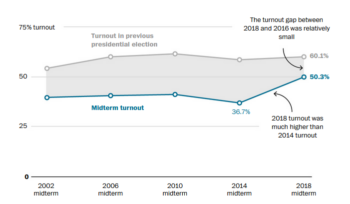 How narrow is this slice? The short answer: About 10% to 15% of voters could be considered “persuadable.”

Votecast reported that in the 2022 election, the number of independents (who don’t lean to either party) was 8%. Add to this party identifiers who switched their allegiance (representing about 4% of the whole electorate). And add to that an unknown (but probably small) number of occasional voters who turned out this time but not some other time, and the total could be as high as 15%.

The number could be even higher in a wave election. Turnout in the 2018 midterms, for example, was the highest in 50 years. This suggests an unusually high number of occasional voters (and “new” voters who had reached voting age in the previous four years) were persuaded to turn out, because of “issues” or some other factor. But it’s impossible for pollsters to predict how large the turnout in any given election will actually be.

Another complication, specifically for the congressional contests, is that only persuadable voters in competitive districts can make a difference. 538 estimates that 124 congressional seats were competitive this year, or 28.5% of the total—45 that leaned Democratic, 39 Republican, and 40 “highly competitive” seats that leaned in neither direction. What these numbers mean is that only about 4% to 5% of the national electorate (15% of 28.5%) are in a position to determine the outcome of the House contest. Even if it were a wave election with, say, 25% of the voters in the persuadable category, that still means that only 7% to 8% of the electorate would be casting the decisive votes.

Pollsters simply can’t tease out such a small proportion of the respondents in their sample to see what motivates them to vote.

Traditionally, pollsters present their data as I summarized their findings earlier in this article: How many voters overall prefer each issue, and how do respondents who prefer a given issue actually vote?

Clearly, that didn’t work in this election. And there is no reason to be confident it will work in any other given election.

The post-election period is more amenable to analysis of issues. By then we know the actual vote totals, and can compare which districts over- and under-performed with respect to party distribution, and how they compared with other districts and with the national vote. From those comparisons, it is possible to infer which issues might have been decisive.

One example is abortion. Just four days before the election, an article in the New York Times (11/4/22) carried the headline: “At Campaign’s End, Democrats See Limits of Focus on Abortion.” Too few people overall cited abortion as a crucial issue. 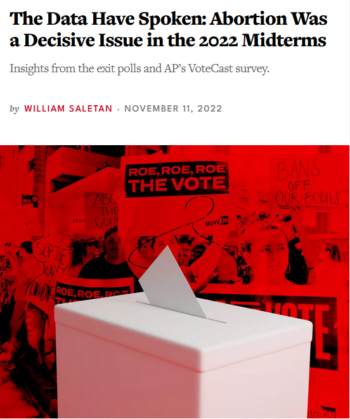 William Saletan (Bulwark, 11/11/22): “Dobbs didn’t just influence which candidates people voted for. It also influenced whether they showed up at the polls at all—and this provided a crucial boost to pro-choice candidates.”

After the election, William Saletan of the Bulwark (11/11/22) reviewed both the network exit poll and Votecast, and concluded that in fact, “Abortion was a decisive issue in the 2022 midterms.” In enough districts, it affected a small but significant number of voters in both their decision to vote and who to vote for.

Another example: Looking at the pattern of voting across all congressional districts and in the crucial Senate elections, Nate Cohn of the New York Times (11/16/22) concluded that, on average, Trump-endorsed candidates under-performed non-MAGA candidates by an average of about 5 percentage points. Although not mentioned as a typical “issue,” it would appear that the former president was nevertheless a significant influence on the election.

No doubt, similar analyses can address the relative importance of other issues. Analyzing what happened, based on actual data, is much more insightful than predicting what might happen.

The real problem with the 2022 news coverage, however, is not that it was off target, but rather, as Julie Hollar noted previously on this site (11/10/22), “prognostication-as-reporting is utterly dysfunctional.” Judd Legum (Popular Information, 11/10/22) likewise argues that the political media is “broken”:

Even if media predictions were correct, they represent a style of political reporting that is dysfunctional. Campaign coverage is increasingly focused on anticipating who will win through polling analysis. But politics is unpredictable, and polls are not nearly precise enough to predict the outcome of a close contest.

That’s a lesson we relearn each election.