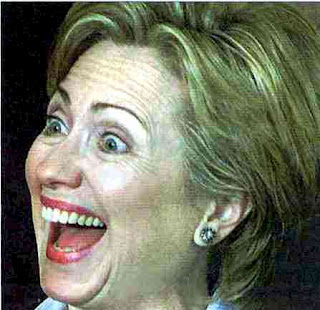 'Massive attack
US elections 2008: Hillary Clinton's pledge to 'obliterate' Iran if it attacks Israel is unnecessarily bellicose
By Richard Silverstein
22/04/08 "The Guardian"

In an interview on ABC's Good Morning America today, Hillary Clinton pledged that if Iran launches a nuclear attack against Israel, the United States would retaliate against Iran. "I want the Iranians to know that if I'm the president, we will attack Iran," Clinton said. "In the next 10 years, during which they might foolishly consider launching an attack on Israel, we would be able to totally obliterate them."
Today promises to be a decisive moment in the Democratic primary campaign, as voters head to the polls in Pennsylvania. Clinton's comments this morning echo remarks she made last week in Philadelphia. There, during the presidential debate, Clinton came just short of promising a nuclear attack on Iran if it were to strike Israel or any of its other Arab neighbours.
According to the transcript this is how the exchange went:
George Stephanopoulos: "Senator Clinton, would you [extend our deterrent to Israel]?"
Hillary Clinton: "Well, in fact ... I think that we should be looking to create an umbrella of deterrence that goes much further than just Israel. Of course I would make it clear to the Iranians that an attack on Israel would incur massive retaliation from the United States, but I would do the same with other countries in the region."
On Warren Olney's To the Point radio show today, Barack Obama's Middle East adviser and former congressman Mel Levine noted that during the Eisenhower administration John Foster Dulles promised the same "massive retaliation" should the Soviet Union attack the US or its allies. This was widely understood as a threat of nuclear attack. Is this really the type of president Americans want? One who so demonises Iran that she's prepared to go to war at the first sign of conflict in the Middle East? Do we want to create a Middle East cold war like the one we had with the Soviets for four decades?
Equally troubling is the fact that Israel, in Clinton's conception, is merely an extension of the US - a member of the greater commonwealth, if you will. Of course, I find the notion of an Iranian attack on Israel disturbing as well. But the idea that we would react to an attack on Israel as if it were an attack on ourselves ties me up in knots.
We are not the same as Israel. We have our interests. Israel has its own. What if Israel attacks Iran first in an attempt to knock out its nuclear programme and Iran counterattacks? After all, Israeli government ministers have threatened a pre-emptive attack on Iran. In the event of such an assault, is Clinton then bound to retaliate massively against Iran though Israel was the aggressor? You can see where this is going, and it isn't any place good.
Clinton's threat was music to one Jewish group's ears: Aipac. She was practically channelling its talking points about Iran and the "existential threat" it poses to Israel. Her rhetoric was meant as red meat for Pennsylvania's Jews in the run up to the state's Democratic presidential primary. She believes they want to hear a battle cry against Iran. This, despite the fact that the latest American Jewish Committee annual opinion survey shows that Jews don't want to rattle sabres with Iran. They want negotiation instead. Of course, Clinton doesn't care so much what the average Jew thinks. She's playing to the Aipac donors and the Jewish PAC money which are more hawkish than the Pope - er, Ehud Olmert.' 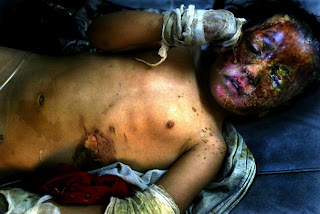 'Why Does the Bush Regime Want to Rule Iraq?
By Paul Craig Roberts 23/04/08
"ICH"
The Bush regime has quagmired America into a sixth year of war in Afghanistan and Iraq with no end in sight. The cost of these wars of aggression is horrendous. Official U.S. combat casualties stand at 4,538 dead. Officially, 29,780 U.S. troops have been wounded in Iraq.On April 17, 2008, AP News reported that a new study released by the RAND Corporation concludes that "some 300,000 U.S. troops are suffering from major depression or post-traumatic stress from serving in the wars in Iraq and Afghanistan, and 320,000 received brain injuries."On April 21, 2008, OpEdNews.com reported that an internal e-mail from Gen. Michael J. Kussman, undersecretary for health at the Veterans Administration, to Ira Katz, head of mental health at the VA, confirms a McClatchy Newspaper report that 126 veterans per week commit suicide. To the extent that the suicides are attributable to the war, more than 500 deaths should be added to the reported combat fatalities each month. Turning to Iraqi deaths, expert studies support as many as 1.2 million dead Iraqis, almost entirely civilians. Another 2 million Iraqis have fled their country, and there are 2 million displaced Iraqis within Iraq. Afghan casualties are unknown.Both Afghanistan and Iraq have suffered unconscionable civilian deaths and damage to housing, infrastructure, and environment. Iraq is afflicted with depleted uranium and open sewers. Then there are the economic costs to the U.S. Nobel economist Joseph Stiglitz estimates the full cost of the invasion and attempted occupation of Iraq to be between $3 trillion and $5 trillion. The dollar price of oil and gasoline have tripled, and the dollar has lost value against other currencies, declining dramatically even against the lowly Thai baht. Before Bush launched his wars of aggression, one U.S. dollar was worth 45 baht. Today the dollar is only worth 30 baht.The U.S. cannot afford these costs. Prior to his resignation last month, U.S. Comptroller General David Walker reported that the accumulated unfunded liabilities of the U.S. government total $53 trillion. The U.S. government cannot cover these liabilities. The Bush regime even has to borrow the money from foreigners to pay for its wars in Iraq and Afghanistan. There is no more certain way to bankrupt the country and dethrone the dollar as world reserve currency.The moral costs are perhaps the highest. All of the deaths, injuries, and economic costs to the U.S. and its victims are due entirely to lies told by the president and vice president of the U.S., by the secretary of defense, the national security adviser, the secretary of state, and, of course, by the media, including the "liberal" New York Times. All of these lies were uttered in behalf of an undeclared agenda. "Our" government has still not told "we the people" the real reasons "our" government invaded Afghanistan and Iraq.'
Lees verder: http://www.informationclearinghouse.info/article19789.htm
op april 23, 2008 Geen opmerkingen: