The European Parliament has renewed its call for an EU-wide arms embargo against Saudi Arabia the day after Theresa May visited the country with a pledge to build a close relationship with its regime.
MPs voted by 368 to 221 to back an embargo against the autocratic petrostate, whose intervention in Yemen has been blamed for causing thousands of civilian deaths and exacerbating a severe shortage of food.
The UK is one of Saudi Arabia’s biggest arms suppliers, having sold £4.6 billion worth of controlled arms since the bombardment of Yemen started in 2015. Of that figure, £1.9 billion is said by the Government to be bombs or missiles and £2.7 billion worth is aircraft. 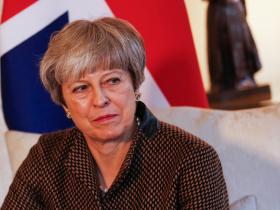 Can May really criticise Saudi for using the weapons we sold them?

20.7 million people in Yemen are in need of humanitarian assistance in the country,  with over 7 million on the verge famine.
The country is being wracked by a civil war between the Saudi-backed and internationally recognised government and Iranian-backed Houthi rebels.
Saudi forces have been widely accused of committing war crimes during the campaign in the country, where reports on the ground suggest they have blown up international hospitals, funerals, schools, and weddings. Peace talks led by the UN have been frozen since August 2016 after no agreement was made.
Speaking in a debate ahead of the vote, Christos Stylianides, the European Commissioner for humanitarian aid, told the Parliament that Saudi Arabia was preventing aid from getting through despite a looming famine.

“We do understand Saudi Arabia’s security concerns. At the same time the new measures taken by the Coalition are having a severe impact on the delivery of lifesaving assistance,” he said.
“Commercial goods cannot enter the areas beyond the government’s control. most Yemenis no longer have the means to get food or fuel. Such escalation has worsened an already dire humanitarian situation.”
Victor Boștinaru, a Socialist group MEP, said: “In Yemen, one of the poorest countries in the world, war and famine continue will impunity, and civilians die under bombs of one of the richest countries in the world, Suaid Arabia, the country we are continuing to sell arms to and offer support.
“The other side of the story is that while we are turning a blind eye and while some are shamefully choosing sides, Saudi Arabia and Iran are turning Yemen into a misery.” 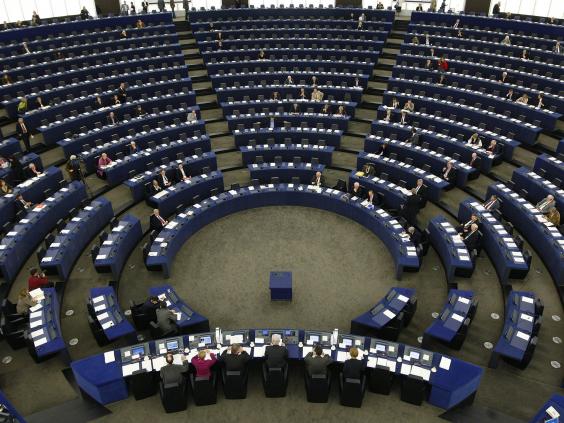 MEPs backed the call for an arms embargo (REUTERS)
Crucially the centre-right European People’s Party did not back the motion calling for the arms embargo, though it did support a less specific motion calling for a new round of peace negotiations.
The Parliament's renewal of a call follows the call by two British parliamentary committees which also called for a ban.

The Prime Minister on Thursday defended her friendly visit to Saudi Arabia, telling reporters who accompanied her on her visit that she was “very concerned about the humanitarian situation in Yemen” but that “building our relationship with [Saudi Arabia] enables us to get that greater knowledge and understanding which enables us to address issues which are of concern to us”.
Andrew Smith of Campaign Against Arms Trade said: “The European Parliament has sent a clear, strong and unambiguous message to governments like the UK, that have been utterly complicit in the destruction of Yemen. European arms have played a central role in the bombardment. The situation has become even worse over recent months with the devastating blockade of Yemeni ports, and the worst cholera outbreak on record.
http://www.independent.co.uk/news/uk/politics/saudi-arabia-arms-yemen-houthi-rebels-control-european-parliament-votes-a8086766.html

On December 4th the Dutch parliament will decide on prolonging the war missions in Mali and Afghanistan and later on the one in Iraq. The government will enforce the armed forces for this, instead of choosing for peace by dimplomacy, by a fair international economy and a good climate policy.

This government wants to increase the Dutch defense budget this year by 900 million euros, and then by an annual 1.5 billion for the coming years. While budgets for child protection, eldercare and education have been largely reduced.

The Netherlands continues to export arms around the world and continues to participate in war missions. These intervention wars do not contribute to peace and security. On the contrary! They result in many victims and refugees. They are defending access to raw materials and profits of large companies. They increase poverty and reduce freedom and democracy in the countries concerned, but also in our own country. An atmosphere of insecurity is emerging that feeds enemy images and raises racism and brings hate into hearts. We say refugees are welcome, but it is better to prevent that they need to flee. Therefor stop the war missions.