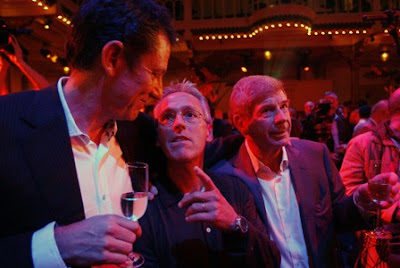 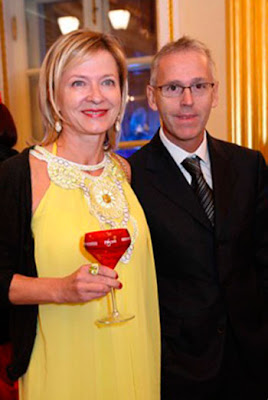 “Russia is a perfect democracy

for the informed. And total

dictatorship for the uninformed”

Derk Sauer, CEO, Independent Media is one of the most

successful publishers in Russia. Last year he sold his

company, which publishes more than 30 titles in Russia

including The Moscow Times and Vedomosti, but continues

in the role of CEO. As part of the Russian Economic Forum

Press Mission, we introduced a group of leading British

business journalists to Mr Sauer, resulting in a fascinating

clash of perceived ideas. All the questions are from the

journalists who chipped in with their thoughts as wide-

How did you come to live and work in

In 1989, a group of Russian journalists came

to Amsterdam. At least, I thought they were

journalists. It turned out they were from

the KGB and were posing as journalists.

They invited me to Russia and suggested

we start a magazine as a joint venture. The

result was the first glossy magazine in the

history of the Soviet Union.

Those people who came to you right at

the start, what was their motivation?

To get rich – as the Soviet Union disin-

tegrated, they saw an opportunity. Rus-

sians thought that if you found a Western

partner and you make money, then boom,

that’s it! It was a wonderful time, a very

romantic time; however these guys had a

They thought that all you do is smoke big

cigars and have nice cars. As a result, all

those joint ventures didn’t work, they all

Was the Moscow Times a big hit from

It was a big flop in the beginning. After

two years, we were really down and out.

I had sold my house in Amsterdam and

everything I had. Together with three

friends, we had put all our money into it,

but the ad market was too small at that

time. But now I have sold the whole busi-

ness. I kept one title - Yoga Journal. I am a

empire and I am building a yoga studio.

For companies, the tragedy was that

they left as soon as the bottomline and the

nies only look at the stupid numbers - they

don’t talk about the product or the idea.

When the crash came, they only looked

at the bottom-line and not at Russia’s pros-

pects and the long term. But people have

very short memories; they all left and then

a few years later, they had to pay ten times

as much to come back.

Do you think change in Russia is more

than skin deep? Is it a profound change

or is the change less dramatic than peo-

England has changed a lot, but has it really

changed? I don’t think so. England is still

a class-based society. It is the same here:

basically nothing has changed. This is not

a democratic society. There is corruption

and there will always be corruption. It is

basically a country where clans run the

show. It won’t change, but has it changed

in appearances - in consumer spending

and wealth. When I first came, people

had nothing and we paid our staff in food

products because they had nothing to eat.

Today, the salaries we pay are unbeliev-

able and much more than publishers pay

What are your thoughts on the quality

of political journalism and the ability to

The quality of Russian journalism is zero,

Except for the Moscow Times…?

Except for the Moscow Times and

Vedomosti, which we publish – also a

But that must be very worrying, most de-

mocracies have a strong press…?

But this is not a healthy democracy, and

any notion that this will be a healthy

democracy is way off. Don’t compare it

to England, or to Holland where I come

What is progress? People here can see

progress. They now can buy a video or a

car and they can travel…

But in the sense of being able to get inde-

pendent unbiased information, is there

There is no progress whatsoever on that.

In fact it has gone backwards.

If you are independent, why can’t the

Well, it is not so easy. Publishing and

working in this country is not so easy.

But is your staff independent of you?

How much do you influence the edito-

lisher. I have only one perrogative – I can

hire and fire the editor. That’s all I can do.

For the rest it’s up to them.

azine and I said to the editorial team what

I always say: I will never ever, ever, inter-

fere in any story. I have never done that in

the entire history of Independent Media.

So that does mean they are

Of course, they can write whatever they

If you are an active journalist in Russia,

do a lot of people apply pressure on

No. They call me.

And is that an active act part of doing

business news? Dealing with that kind

Yes, but how it works is very simple. The

day is more humorous than it was under

Brezhnev. It is really funny to watch. It’s so

bad it’s totally pathetic. So you may have

10,000 people protesting on the street here

and they won’t say a word about it. But if

Putin sniffs his nose then it’s all over the

The local press is completely controlled

by the local oligarchs or governors. You

do what you are told, otherwise you get

killed or fired or they stop the press.

Then there’s a small group of central

newspapers or magazines which they

leave alone. We are the most important

representatives of those. Why? Because

they love us. Because we criticise them

and they can show the world.

So you are a token?

How easy is it to get genuine stories? The

of the government, are they?

No, but we have Reuters, and we have

our own journalists. We have an excellent

And they go out and get real stories?

West about Moscow comes from us. The

Guardian, the Independent - every morn-

ing they read the Moscow Times and then

they start writing. I always see every story

pop up in the New York Times or wher-

Do you worry that you can’t make genu-

I do yoga; I don’t worry about anything.

It’s not my role in life!

If you were a worrier though, would you

You have to accept that Russia is a differ-

ent country. I say, it’s like if Bush wants

Iraq to be a democracy, that is total stu-

pidity. Iraq will not be a democracy no

matter what they do. Russia will not be a

democracy in the way that you perceive a

Is there a separate reality going on where

people can get their information if they

I always say that Russia is a perfect de-

mocracy for the informed. And total dic-

Is the situation improving?

prosperous, the pressure for liberalisa-

Is Saudi Arabia, which is a very rich soci-

ety, free and open? You have to compare

Russia not to England but to Saudi Arabia.

Do you think that things can change at

the margins? You mentioned Britain, but

Britain is not as class-ridden as it was?

Of course it is changing – although some-

times I feel it is going back again. But you

have to look at Russia with a long-term

tionship with Europe. They want to be in

Europe, but as soon as they get too close

Were you more optimistic about Russia

I came with the same perspective as you

come here now. You are judgemental, be

it optimistis or pessimistic, but I am nei-

ther. I just enjoy Russia and I don’t have

the expectation that it will become a dem-

ocratic society as we have in Holland. In

Russia, it is the extremes –everything is

bigger than life. For example, my kids go

to school with rich Russians. This week

my nine-year old son went to a birthday

party for one of the girls in his class. For

her present she got a pink Hummer with

But most of the population in Russia

don’t have the ability to move up – there

aren’t the opportunities for the major-

No, you are wrong. First, you can’t talk

about Russia. What is Russia? It is a

myth. It is from China to the Baltics. If

cities, with a circulation of 1m and up. In

all of those cities there is very dramatic

development. In between, there is an

enormous amount of land where there

are people and they live in the middle

ages. They don’t participate. Forget about

well not be there.

That is an extraordinary thing to say,

you can’t just write off a quarter of the

I am just painting how the situation is.

I am not saying if it is good or bad. These

Then surely there is a responsibility to

help these people. That is what human-

I agree with you. But what you do is bring

your perceptions and the Russians don’t

It doesn’t make it right though…

What is right and wrong? I am not judg-

I also think that it is to do with Chris-

ent. It is about suffering - they actu-

ally think that it is good to suffer. The

is Christian Calvinist, and they do not

have that in Russia. But they may get to

heaven before I do!

You bring your Anglo-Saxon concepts

to the country, and ask what about this?

I have learnt to forget about my back-

ground and just take it as it is. I look at

it and find it fascinating.

Are Russia’s problems, for example of

drugs and HIV/Aids, exaggerated or

stereotyped in the Western media?

No, these are huge problems. The demo-

graphic problems are the biggest, most

means that they will need immigrants

to work. Already go if you go to Vladi-

vostok you feel China on the door. The

immigrants have to fill the labour gap.

How will the Russian people react?

Russians are nationalistic, and say, ‘Get

rid of the foreigners’. But it is ridiculous

because then no one would clean the

streets. They say, ‘The foreigners run

the markets’, but are Russians going to

stand on the markets?

Are you an honorary Russian? Do you

I am as Dutch as you can get! But I do