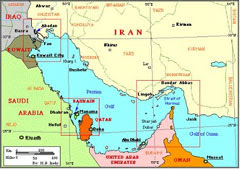 'Provocation in the Strait of Hormuz By Marc Ash t r u t h o u t Perspective Two separate news reports relying mostly on information provided by the Pentagon were picked up and disseminated by US mainstream media outlets Monday. The reports point to two separate instances involving US armed forces operating in the Persian Gulf and the Strait of Hormuz.
The first, typified by The New York Times, "US Describes Confrontation With Iranian Boats," and the second, tucked away from the features sections, "Navy Fighter Jets Crash in Persian Gulf," reported by the Associated Press, are not connected directly in the reports, but bear consideration side-by-side nonetheless.
The report in The Times, in fact, tells you everything you need to know, albeit in a conclusionless form. US Warships are in the Persian Gulf. The Strait of Hormuz, through which all warships must pass to enter the Gulf, is the same passage through which all oil-bearing ships must pass bringing oil to the US. And "Oil prices on world markets spiked briefly on the news, which was first reported by CNN." That pretty much says it all.
US Navy warships are parked a few miles off the coast of Iran. They are there, apparently, to protect oil shipping lanes into and out of the Persian Gulf. Tensions are mounting. If provocation is at issue, those facts must remain front and center. If Iranian warships ever made it as close to the American coastline as US warships now lie to Iranian shores, our military would in all likelihood attack them. Iran is not attacking our warships - parked on their doorstep.
The US State Department last year warned Iran "not to interfere with US interests in the region." What the State Department did not explain to the American people is what interests average Americans have in the region. The answer to that question is, likely none. That leads to the next question: whose interests is the American Navy protecting in the Persian Gulf? The owners of the oil tankers, apparently. The American people are the end consumers; we pay what's marked on the pump. Bluntly stated, the United States Navy appears to be in the Persian Gulf to protect the interests of US-based oil businesses, not the interests of the American people. Incidentally, the second-largest deposits of oil in the world lie beneath the soil of Iraq, so the same formula applies there as well.
Could Iranian forces sink an American ship a few miles off the Iranian coast? Yes, although it is highly unlikely that they would say beforehand, "I am coming at you, and you will explode in a few minutes." Would such a sinking take the lives of many good American sailors? Yes, it would. Such a sinking and the attendant loss of life would affect the best interests of the American people. The American armed forces are the true interest of the American people. For too long, the American people have turned a blind eye to their interest: their service members. It's time to bring our soldiers home and let the gas station mind its own business.'
Zie: http://www.truthout.org/docs_2006/010808J.shtml
op januari 10, 2008 2 opmerkingen: