‘The US Must Break Free of the Banana Republic Mentality’ 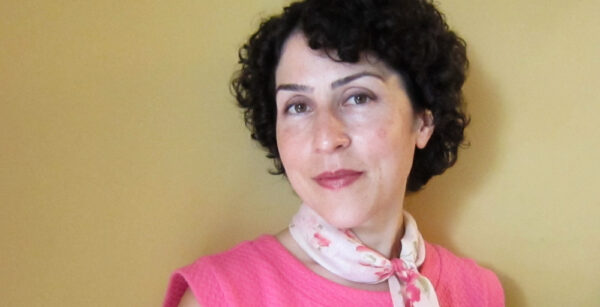 Janine Jackson interviewed Project South’s Azadeh Shahshahani about the Biden administration’s Central American plan for the August 19, 2022, episode of CounterSpin. This is a lightly edited transcript.

Janine Jackson: Listeners may remember Vice President Kamala Harris last summer, on her first official international trip, telling Guatemalans who might consider migrating to the United States, “Do not come.”

While that language was criticized by some as tone deaf, the administration’s message that they would be, as the New York Times put it, “breaking a cycle of migration from Central America by investing in a region plagued by corruption, violence and poverty” was well and ingenuously received. 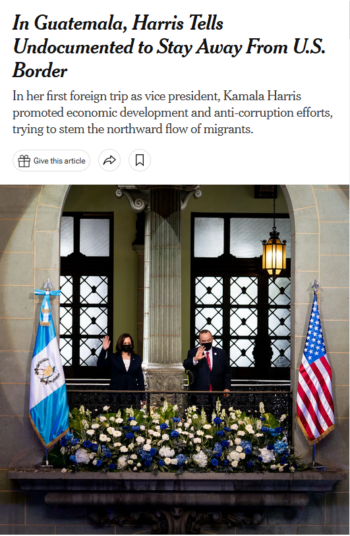 The White House has since announcedsome $2 billion in private sector “commitments” to Honduras, Guatemala and El Salvador, part of what they’ve dubbed a “call to action” to engage the root causes of migration from the region by driving what officials repeatedly describe as an “ecosystem of opportunity” that will allow people of the region to build healthy lives at home.

US corporate news media never met a public/private partnership they didn’t like, and they aren’t so big on using critical history to shape foreign policy coverage. So if you want to hear challenging questions about this White House plan to bring peace and prosperity to northern Central America, they won’t be the place to look.

Our guest raises some of those questions in a recent piece co-authored for In These Times, titled “The White House’s Plan to Stem Migration Protects Corporate Profits—Not People.”

Azadeh Shahshahani is legal and advocacy director at Project South. She’s also a past president of the National Lawyers Guild. She joins us now by phone from Atlanta. Welcome to CounterSpin, Azadeh Shahshahani.

Azadeh Shahshahani: Thank you very much for having me.

JJ: US government involvement in northern Central America is a long history, violent on many levels, and I don’t want to pretend we’re addressing all of that right now. But if you don’t put the Biden administration’s “call to action” in Guatemala, Honduras and El Salvador in a historical context, it seems like you just can’t see it clearly. So please talk us through a bit about what you and others see as primary points of concern about this plan and about the approach that it reflects.

AS: One of the primary concerns is the administration’s lack of acknowledgement about the long history of US intervention, and facilitating coups against leftist presidents and democratically elected governments in support of US corporate and business interests in the region, from Guatemala to El Salvador to Honduras. 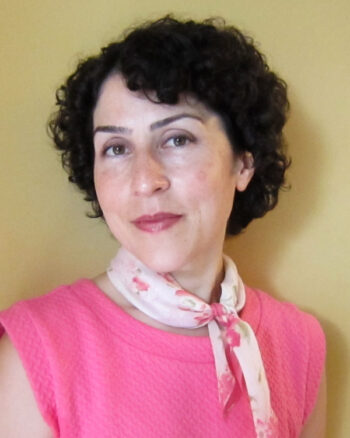 Azadeh Shahshahani: “The US obviously has had a very clear role in destabilizing the region, which has in turn led to forced migration.”

And in Honduras, as recently as 2009, of course, we had a coup supported by the Obama administration toppling the democratically elected President Manuel Zelaya.

And so the US obviously has had a very clear role in destabilizing the region, which has in turn led to forced migration. So, for example, the number of Honduran children crossing the border increased by more than 1,000% in 2014, so within five years of the coup.

And as another example, immigration from Mexico has doubled since the US signed the North American Free Trade Agreement in 1994, which has had the impact of undercutting small business and crushing low-income workers, and has made migration, really forced migration, a matter of survival.

And so the question that we really need to be asking is: “What is driving this call to action? Is it actually supporting people, including Indigenous communities?” Obviously not. What lies at the heart of this call to action, like previous US government plans toward Central America, and I should say Latin America generally, is to preserve and promote corporate interests.

JJ: Concretely, for one thing, the US, we’re told, has a commitment from this company SanMar, that we’re told is going to create 4,000 jobs. I think US listeners understand that media are very interested in promises of job creation, and much less interested in following up on how it plays out. But just using that as an example, what is there to think about there?

AS: Right, so SanMar is a US-based apparel company. And supposedly it’s going to purchase more from Elcatex, which is a Honduras-based garment manufacturer that SanMar partially owns.

The Collective of Honduran Women, which is an organization of women who work in Honduras’ garment sweatshops, has long denounced the low wages, long hours and serious repetitive motion injuries that they suffer in Honduras’ textile industry.

And they actually submitted a petition to the Inter-American Commission, which has been admitted, on behalf of 26 women who have suffered some serious injuries as a result of working in the garment factories, including three Elcatex workers with alleged permanent partial disabilities.

And so these are issues of serious concern. And the issue is also lack of living wages and labor rights for the workers in the garment industry. And so the true beneficiary of SanMar’s increased purchasing from Elcatex is going to be SanMar itself, because SanMar is a partial owner of Elcatex, and also one of the corporate elite, which is a pattern we see repeatedly, that these business bills actually support the oligarchy in northern Central America.

JJ: This is obviously connected, because anti-corruption, and the idea that corruption is going to be rooted out, is key to the call to action’s promises here. There’s an Engel list about, you know, you’re going to get on this list if you’ve been involved in any sort of corruption. How do you see that playing out in practice, in terms of these deals that are being made? 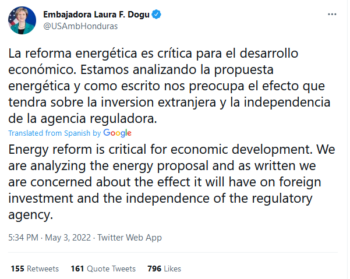 AS: Right, well, we’re not truly seeing actual accountability, with the one exception being Honduras. So you know, the 2009 coup was followed by 12 years of plundering and corruption. And so now the Honduran President Xiomara Castro and the new Congress have pledged to combat corruption and restore state institutions.

As a part of this, Honduras recently passed a new energy law, which, among other elements, is basically going to enable the government to renegotiate the contracts by which it purchases energy from private energy producers and set more reasonable rates, because right after the 2009 coup, the government had started negotiating this contract with the private sector that basically gave them huge profits.

So it was estimated that the Honduras energy company, about 70% of its revenue was going to these private companies, whereas if it could produce the energy itself, it would be a lot less money.

You would think that this is something that the US would be supporting, based on the anti-corruption rhetoric at the root of the call to action and all the rest. But then we see the US ambassador to Honduras criticizing the law on Twitter when it was introduced in the Honduran congress, expressing worry about this effect on foreign investment, which again shows us that the US’s true motives are corporate profit.

JJ: Right, here you have an example of a state saying they want to use their state resources to benefit their own people, and you have the US saying, “Well, you know, maybe that’s not a good idea.” It certainly should raise some questions.

How we think that migrants should be treated when they arrive in the US is a separate if deeply related question to foreign policy, that is affecting and has affected conditions in those home countries. 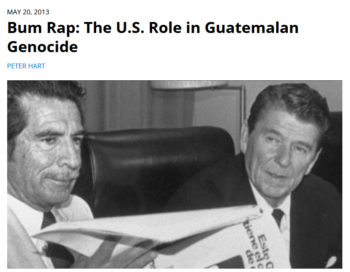 If the goal were to stem migration, and I’m not saying anything, frankly, about that as a goal in itself, but if the goal were to stem migration from northern Central America by making or helping to make lives safer and more livable there, what would that policy look like, including what would the US stop doing if those were the real sincere goals?

AS: I think as a first step, the White House would honestly contend with the bloody US history of intervention in the region, including coups and the financing and backing of military regimes as they carried out widespread atrocities, including in Guatemala and El Salvador.

And the US basically must break free of the banana republic mentality that sees the region as a source of natural resources and cheap labor, and begin to respect the autonomy and self-determination of the people in the region.

And so at the very least, the call to action should include a demand for US corporations that operate in the region to pay living wages and respect labor rights, and to also respect the land and territorial rights of Indigenous peoples, and to obey rather than to weaken relevant national laws. And so those would be some steps in the right direction.

AS: Sure. Well, stop taking things at face value, especially these calls to action and statements coming from the White House, you know. Let’s try to dig deeper, to see what lies at the root of this call to action.

What corporations does this benefit, what oligarchy or set of actors, including people with enormous influence on politicians in Latin America? And look at the connections, also, between US imperialism, corporate interests and forces such as the School of the Americas that is also based in Georgia, that for a long time has trained military forces and paramilitary forces in Latin America in tactics of torture and repression, and is open and running to this day. 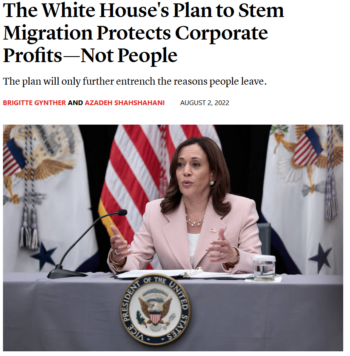 So let’s make the connections, and hold the White House accountable for the hypocrisy when they’re calling for democracy and human rights and the rule of law and anti-corruption initiatives. What does that actually mean when we see the actual opposite?

JJ: Absolutely. We’ve been speaking with Azadeh Shahshahani. She’s legal and advocacy director at Project South. They’re online at ProjectSouth.org. And you can find her recent co-authored piece on the White House call to action on InTheseTimes.com.

Thank you so much, Azadeh Shahshahani, for joining us this week on CounterSpin.

AS: Thank you so much for having me.