Just notified by YouTube that @AbbyMartin’s interview with @MaxBlumenthal has been blocked from being viewed in 28 countries (including Israel) to “comply with local laws.” Actions disabled & warnings for viewers elsewhere. https://www.youtube.com/watch?v=MlNn1v4_Uf0&bpctr=1522915691 … 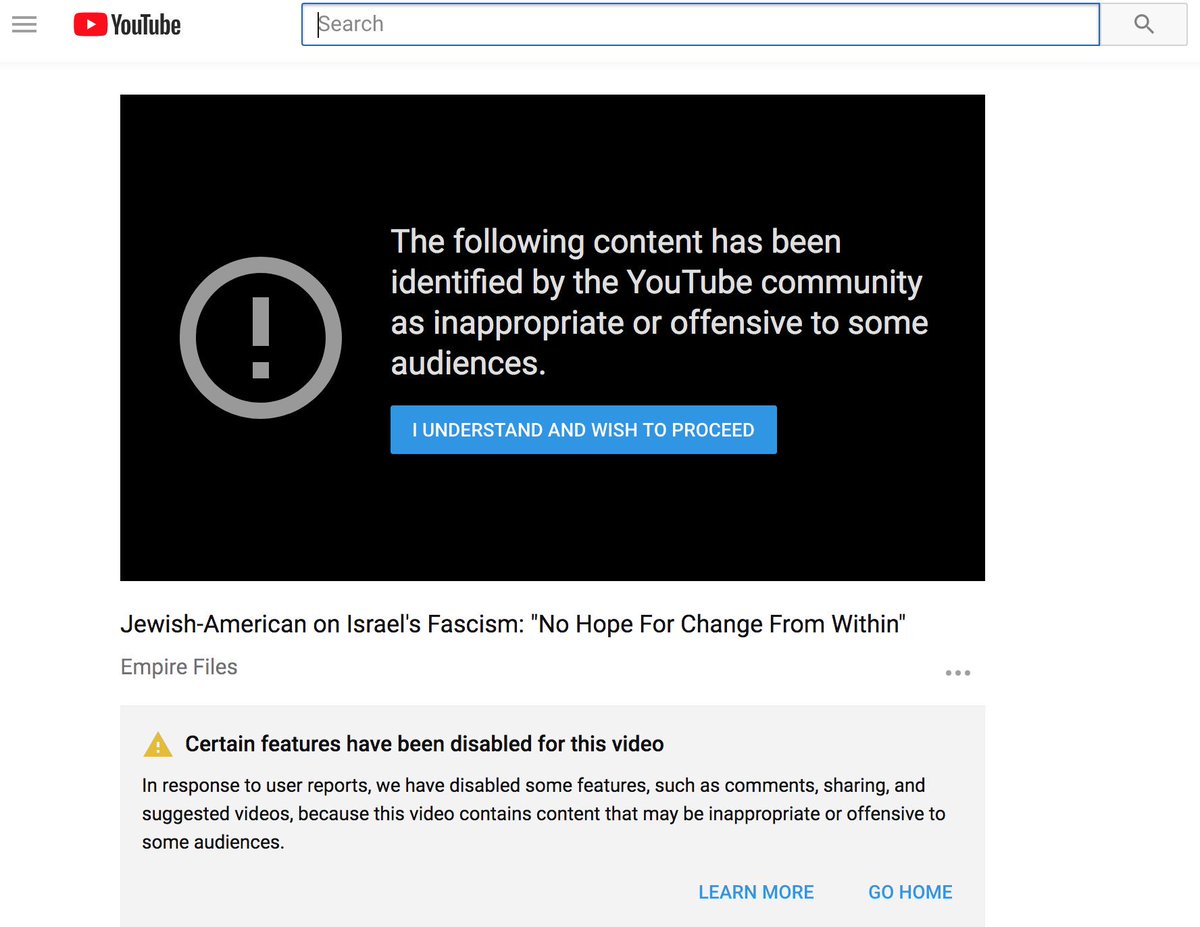 Israel said that killing and crippling Palestinian protestors on 31st March was "accurate and measured, we know where every bullet landed". Now YouTube has banned an @EmpireFiles video that spotlights Israel's alleged 'shoot to cripple' policy against Palestinian demonstators:

7
0
0
0
Abby Martin interviews journalist and author Max Blumenthal on the current situation in Palestine and the Israeli occupation. This episode covers what is behind today's rebellion, the rising dominance of far-right, ultra-racist ideology in Israel, eye-witness accounts of the aftermath of the Gaza war, and the Israeli government's fear of Palestinian resistance.
Max Blumenthal is an award-winning journalist and New York Times Best Selling author. He has written two books on Palestine, "Goliath: Life and Loathing in Greater Israel", and the recently-published "The 51 Day War: Ruin and Resistance in Gaza."FOLLOW @EmpireFiles & @AbbyMartin
https://vimeo.com/263657337
op april 07, 2018 Geen opmerkingen:

Jewish NAZI Proud of Killing Palestinians and The West Accepts This

As Middle East peace talks are set to resume after a five-year freeze, 972 Magazine reports a member of Israel’s cabinet has declared his backing for simply killing Palestinian prisoners, rather than bringing them to trial.
On Sunday, Israel announced it would release 104 Palestinian prisoners, a key caveat in the John Kerry-brokered plan to renew peace talks.
But according to the 972 report, Israel’s minister of Industry, Trade and Labor and Jewish Home Party leader Naftali Bennett could not have disagreed more, proposing during Sunday’s cabinet meeting a swifter, but illegal way to deal with prisoners.
“If you catch terrorists, you have to simply kill them,” Bennett allegedly said, according to a report in the Hebrew-language print edition of Yedioth Ahronoth.
Israeli National Security Adviser Ya’akov Amidror allegedly responded by saying that such a practice was illegal. Bennett then reportedly declared, “I’ve killed lots of Arabs in my life – and there’s no problem with that.”
A former IDF officer, the right-wing Bennett briefly joined protesters against the decision to release prisoners before attending Sunday’s cabinet meeting. According to The Jewish Press, prior to Sunday’s vote, Bennett said, “Terrorists should be killed, not released.”
Peace talks are slated to begin in Washington on Monday, though both sides remain skeptical about the commitment to resolving the decades-long stalemate.

According to 32 pages of State Department documents obtained by Judicial Watch via a Freedom of Information Act lawsuit, Barack Obama’s State Department and the U.S. Agency for International Development (USAID) spent nearly $9 million on an Albanian political reform campaign coordinated with billionaire George Soros.
Iron clad evidence that former POTUS Obama meddled in Albanian politics, with George Soros by his side.
Remember when Laura Ingraham asked former CIA chief James Woolsey if the US ever meddled in other countries’ political process, the response (and laughter from both of them) was telling…

Working with Soros’ Open Society Foundation, USAID channeled the funds into a “Justice for All” campaign aimed at reforming the socialist government’s judicial system in 2016.
“The Obama admin spent at least $9 million in tax dollars in direct collusion with left-wing billionaire George Soros to back socialist gov in Albania,” wrote Judicial Watch President Tom Fitton in a statement. “The records also detail how the Soros operation helped the State Department review grant applications from other groups for taxpayer funding,” Fitton added.
“George Soros is a billionaire and he shouldn’t be receiving taxpayer support to advance his radical left agenda to undermine freedom here at home and abroad,” said Fitton.
A memo from April 2016 also reveals that the U.S. Embassy in Tirana “sponsored” a survey with the Open Society Foundation to determine whether Albanians had “knowledge, support and expectations on judicial reform.” The survey revealed that 91% of respondents believed in the need for judicial reform. A corresponding memo obtained by Judicial Watch dated February 2017 corroborates the arrangement.
The State Department pushed back following the Judicial Watch publication – telling Fox News that the agency did not directly provide grants to Soros’s Open Society Foundation (OSF) in Albania. Instead, as the documents show, the US embassy in Tirana and the OSF “each provided funding to a local organization to conduct a public opinion poll on attitudes towards the Judicial Reform effort,” according to a February 2017 document.


Last year Senator Mike Lee (R-UT) and five other Senators called on Secretary of State Rex Tillerson to immediately investigate how US taxpayer funds ended up supporting Soros-backed, leftist political groups in several Eastern European countries including Macedonia and Albania.  According to the letter, potentially millions of taxpayer dollars are being funneled through USAID to Soros’ Open Society Foundations with the explicit goal of pushing his progressive agenda.
“Foundation Open society-Albania and its experts, with funding from USAID, have created the controversial Strategy Document for Albanian Judicial Reform,” the letter read. “Some leaders believe that these ‘reforms’ are ultimately aimed to give the Prime Minister and left-of-center government full control over the judiciary.”
As the Daily Caller’s Andrew Kerr notes, Albanian opposition leaders to the ruling left-wing party took to calling the judicial reform effort a “Soros-sponsored reform.”

While most of western mainstream media curiously forgot to report on the Obama-Soros Albania meddling, Fox News’ Tucker Carlson was not about to let this story slip into the liberal left media memory hole.

The Obama admin spent at least $9 million in tax dollars in direct collusion with left-wing billionaire George Soros to back socialist gov in Albania. Outrageous that State allowed the Soros operation to help direct taxpayer funds to other groups,

11:30 - 4 apr. 2018
Fox News reports that USAID gave nearly $15 million to Soros’ Foundation Open Society – FYROM, and other Soros-linked organizations in the region, in the last 4 years of Obama’s presidency alone.

The USAID website shows that between 2012 and 2016, USAID gave almost $5 million in taxpayer cash to FOSM for “The Civil Society Project,” which “aims to empower Macedonian citizens to hold government accountable.” USAID’s website links to www.soros.org.mk, and says the project trained hundreds of young Macedonians “in youth activism and the use of new media instruments.”
The State Department told lawmakers that in addition to that project, USAID has recently funded a new Civic Engagement Project which partners with four organizations, including FOSM. The cost is believed to be around $9.5 million. –Fox News

Zerohedge reports that similar efforts in Hungary were blasted in early 2017 by Prime Minister Viktor Orban, who expressed concern about Soros meddling in his country’s political fights, and warned about Soros’ “trans-border empire.”Hungarian Foreign Minister Péter Szijjártó told Fox News last month that they hoped that with a change in administration in Washington, the Soros-led push against their government would decrease.

“I think it is no secret and everyone knows about the very close relationship between the Democrats and George Soros and his foundations. It is obvious that if Hillary Clinton had won then this pressure on us would be much stronger. With Donald Trump winning we have the hope that this pressure will be decreased on us,” he said.
Widely cited as an example of Soros’ influence during the Obama administration was a 2011 email, published by WikiLeaks, in which Soros urged Hillary Clinton to take action in Albania over recent demonstrations in the capital of Tirana.  Among other things, Soros urged Clinton to “bring the full weight of the international community to bear on Prime Minister Berisha and opposition leader Edi Rama.”
Dear Hillary,
A serious situation has arisen in Albania which needs urgent attention at senior levels of the US government. You may know that an opposition demonstration in Tirana on Friday resulted in the deaths of three people and the destruction of property. There are serious concerns about further unrest connected to a counter-demonstration to be organized by the governing party on Wednesday and a follow-up event by the opposition two days later to memorialize the victims. The prospect of tens of thousands of people entering the streets in an already inflamed political environment bodes ill for the return, of public order and the country’s fragile democratic process.
I believe two things need to be done urgently:
1. Bring the full weight of the international community to bear on Prime Minister Berisha and opposition leader Edi Rama to forestall further public demonstrations and to tone down public pronouncements.
2. Appoint a senior European official as a mediator.
While I am concerned about the rhetoric being used by both sides, I am particularly worried about the actions of the Prime Minister. There is videotape of National Guard members firing on demonstrators from the roof of the Prime Ministry. The Prosecutor (appointed by the Democratic Party) has issued arrest warrants for the individuals in question. The Prime Minister had previously accused the opposition of intentionally murdering these activists as a provocation.
After the tape came out deputies from his party accused the Prosecutor of planning a coup d’etat in collaboration with the opposition, a charge Mr. Berisha repeated today. No arrests have been made as of this writing. The demonstration resulted from opposition protests over the conduct of parliamentary elections in 2009. The political environment has deteriorated ever since and is now approaching levels of 1997, when similar issues caused the country to slide into anarchy and violence. There are signs that Edi Rama’s control of his own people is slipping, which may lead to further violence.
The US and the EU must work in complete harmony over this, but given Albania’s European aspirations the EU must take the lead. That is why I suggest appointing a mediator such as Carl Bildt. Martti Ahtisaari or Miroslav Lajcak, all of whom have strong connections to the Balkans.
My foundation in Tirana is monitoring the situation closely and can provide independent analysis of the crisis.
Thank you, George Soros

Finally as Zerohedge points out, much to the surprise of no one…within a few days a U.S. envoy was dispatched.